The holy kiss is a traditional Christian greeting. The term comes from the New Testament, where it appears five times. It is mentioned in:

• Romans 16.16a — "Greet one another with a holy kiss" (Greek: ἀσπάσασθε ἀλλήλους ἐν φιλήματι ἁγίῳ).

• I Corinthians 16.20b — "Greet one another with a holy kiss" (Greek: ἀσπάσασθε ἀλλήλους ἐν φιλήματι ἁγίῳ).

• II Corinthians 13.12a — "Greet one another with a holy kiss" (Greek: ἀσπάσασθε ἀλλήλους ἐν ἁγίῳ φιλήματι).

To this day, kissing is performed as a standard greeting throughout the world, including in the Midle East. It Europe, it is often on both cheeks. Not everyone feels comfortable with receiving a kiss on the cheek from someone who is not a family member. However, we are in the family of Christ and we are family members. The Church desperately needs to show love to each other and I believe greeting people with a hug or loving kiss is helpful. And what about our society being so sexual, doesn't this make it worse? I don't believe so. I believe this "normalizes" people for lack of a better word, because people just plain need physical touch and the Church, like family, is an essential organism that we all need to be a part of. I have lived in South Florida for about 20 years. This is a very Latin American culture and everyone kisses each other on the cheek. However, in the United States, there's a lot of "cold love" and people are largely afraid to even touch each other. A lot of people are afraid of offending someone else, so they even try to be "politically correct." A guy won't touch another guy for fear of appearing gay. A lot of Pastors don't speak out on controversial topics for fear of losing members or tax status from the IRS. Most people are so wrapped up in themselves that they don't want to make time for others. Because this generation is becoming so cold, it is essential for the Church to display genuine love. People are craving genuine love, something they are not finding from the world. Matthew 24:10 says of the last days, "And then shall many be offended, and shall betray one another, and shall hate one another." I believe as Jesus said, that His disciples will be known by the love we have for one another (John 13:35).

It appears that the early church's holy kissing was almost always on the lips. The reason is powerful: that form of kiss implied equality and a kiss on the cheeks implied one person was inferior. There's nothing like a Kingdom Kiss as an acted parable and reminder that in Christ we are equal! However, I don't recommend you start this practice because it will surely get you in trouble. Of course, today, when we look at cultural equivalents like the "holy hug", or "holy handshake," we might not realize that that too, began as a Kingdom equalizer.

Just as kissing had many different meanings in the wider ancient world, so too early Christians interpreted the kiss in various ways. Because ancient kissing was often seen as a familiar gesture, many early Christians kissed each other to help construct themselves as a new sort of family, a family of Christ. Similarly, in the Greco-Roman world, kissing often was seen as involving a transfer of spirit; when you kissed someone else you literally gave them part of your soul. The early church expanded on this and claimed that, when Christians kissed, they exchanged the Holy Spirit with one another. Christians also emphasized the kiss as an indication of mutual forgiveness (it’s from here that we get the term “kiss of peace”). These different meanings influenced and were influenced by the sorts of rituals kissing became associated with. For example, because the kiss helped exchange spirit, it made perfect sense for it to become part of baptism and ordination, rituals in which you wanted the Holy Spirit to descend and enter the initiate. The flip side of the coin is that before someone was baptized you wouldn’t want to kiss them. Early Christians often believed that previous to exorcism and baptism people were inevitably demon possessed. Given that they also thought that kissing resulted in spiritual exchange, it’s pretty clear why you wouldn’t want to kiss non-Christians. I sometimes think of this as an ancient form of “cooties.” It resulted in early Christian debates over whether one could kiss a pagan relative, if one should kiss a potential heretic, or if Jews even had a kiss.[1]

"There are those who do nothing but make the church resound with the kiss."


“We are the temple of Christ, and when we kiss each other
we are kissing the porch and entrance of the temple.”

"when your lips draw close to the lips of your brother, let your heart not draw away." 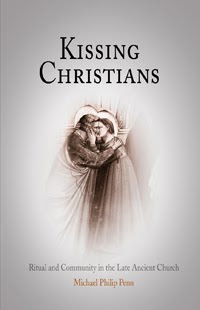 One interview with Michael Penn, Author of Kissing Christians:

Whoever said ''a kiss is just a kiss" didn't know their theological history. During Christianity's first five centuries, ritual kissing -- on the lips -- was a vital part of worship, says Michael P. Penn, who teaches religion at Mount Holyoke College in South Hadley, MA. In that context, kissing helped Christians define themselves as a family of faith, he writes in his new book, ''Kissing Christians: Ritual and Community in the Late Ancient Church" (University of Pennsylvania Press). Excerpts from a recent interview follow.

Q: Let me start with the basic question: Who kissed whom?

A: In the first two centuries [AD], men may kiss men, women women, but also you would have men and women kissing one another. In future centuries, there continued to be a debate over who should kiss whom. In later years, Christians will no longer have men and women kissing each other, but only men men, women women. [Christians had] debates on whether or not priests could kiss the laity, on whether you should kiss a non-Christian relative in the normal, everyday situation, even debates over whether Jews have a kiss or not.

Q: When in the service was the kiss performed?

A: Our earliest references would be a kiss that would follow a communal prayer. Later on, it gets increasingly associated with the Eucharist and also occurs in part of the rites of baptism and in ordination rites. You have Christians kissing each other as an everyday greeting or also martyrs, before they're killed, kissing one another.

Q: What was the theological significance?

A: In antiquity, a kiss on the lips was seen as transferring a little bit of one's spirit to the other person. You have a lot of early -- I kind of think of them almost as Greco-Roman Harlequin -- novels that speak of the kiss as this transfer of spirit. Christians modify it a bit, to suggest that when Christians kiss each other, they don't just exchange their own spirit, but also share a part of the Holy Spirit with one another. So the kiss is seen as a way to bind the community together.

There's another side, though. There was a concern that kissing an individual who has promised to join the Christian community but isn't yet baptized should be avoided, because the spirit that would be transferred wouldn't be a holy spirit but a demonic spirit. So you have the kiss working as this ritual of exclusion.

Judas kissing Jesus [to betray him] terrifies them a lot more than eroticism. There's this evil intention behind it. Early Christian writers use the kiss of Judas to warn that it's not just how you practice the kiss, but what you're thinking. If you kiss another Christian while keeping evil in your heart against them, you are repeating Judas' betrayal.

Q: When did kissing fall out of favor?

A: In the third century, men and women are no longer to kiss one another. Early Christians met in what we think of as a house church -- you meet in someone's living room, essentially. Starting in the third century, when Christians [worship] in a public forum, this familial kiss is less appropriate. It's also a time where Christianity becomes concerned with making sure women and men are categorically separated. In the fourth century, that clergy and laity become increasingly distant. You start having prohibitions against clergy and laity kissing one another.

The ritual kiss never entirely died out. We still have it as an exchange of peace [in Christian services]. We see it in the kissing of the pope's ring. In Catholicism, a priest may kiss a ritual object.

Q: What would Christianity have been without the kiss?

A: What I find exciting is to see how what we think of as trivial is so central to early Christian self-understanding. Our earliest Christian writing, Paul's letter to the First Thessalonians, talks about the ritual kiss, albeit briefly. We have hundreds of early Christian references to this ritual. For these authors, it was anything but trivial.

1.Penn, Michael. On Kissing: A Q&A with Michael Penn.

© Todd Tyszka
Permissions: You are permitted and encouraged to reproduce and distribute this material in any format provided that you do not alter the wording in any way, you do not charge a fee beyond the cost of reproduction, you do not make more than 500 physical copies, and you include the following statement on any distributed copy:

For web posting, a link to this document on our website is required. Any exceptions to the above must be formally approved by Todd Tyszka.